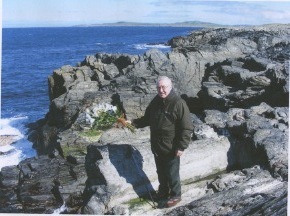 Description of the Photo:
As told by John de la Cruz (IV):

The only knowledge any of the family had about John de la Cruz I was that he was "lost at sea". I was talking to my oldest surviving relative, Ben May, a cousin of my father (his mother was Madeline de la Cruz), when he was aged 90. He said that Juan de la Cruz was drowned off the Island of Islay, Scotland, in 1911, the year that he was born. This was a tremendous breakthrough. I made further inquiries with the Museum of Islay life and discovered the following tragic story. I visited the site in May 2012 and was taken to the site by the local farme at Kilchiarain, Tom McLelland.

On the 1st November 1911, the sailing ship OCEAN left Dublin, Ireland, in ballast bound for Norway. There was a crew of fifteen, including the ship's cook, Juan (John) de la Cruz. She sailed north up the Irish Sea and hit a violent storm. On 3rd November, off the West coast of Islay, her sails were blown away and she drifted uncontrollably towards Islay's rocky shore.

Very early on the morning of the 4th, two Islay men, Andrew Stevenson and Donald Ferguson, saw the crippled ship drifting and followed her as she was pushed northwards by the storm, closer and closer to the rocks. The crew were huddled together in the bow, unable to steer the ship without her sails. All they could do was wait for the ship to hit the shore and pray for a chance to save themselves.

The OCEAN finally went ashore, bow first on a rocky promontory just north of Kilchiaran Bay on Islay's rugged west coat. Before the crew could jump ashore, gigantic seas swept her round and pushed her stern first into a cleft in the rocks. With this second blow the ship broke in two. The crew were left in a perilous situation as it looked as if it would break up at any moment. The courageous captain, A. Christopher, jumped into the raging sea with a rope and swam towards the shore. He only made it a short distance when, sadly, he was smashed against the rocks and killed. The crew members, wet and freezing, were left to wonder what was going to happen next. Fate then came to their rescue. The stern mast came crashing down and landed on the rocks.

The crew immediately seized their chance and scrambled down onto the rocks. Two men were swept off the mast and drowned. Twelve others saved themselves, aided by the two brave Islay men who had by now roped themselves to the shore and swam out to assist the crew to safety aided by a third person.

The last crewman, an old man, was seen to sit on the stern hatchway for four hours while the stormy seas raged and crashed over him, but he would not, or could not, move to save himself. Eventually he disappeared below and was never seen again. By 2pm on the 4th November 1911 the ship had been smashed to pieces.

Two of the three Islay men who undertook the rescue received awards for their gallant actions. Gilbert Ferguson was awarded the OBE and his  son, Donald Ferguson, received a medal from the Glasgow Islay Association for saving life.