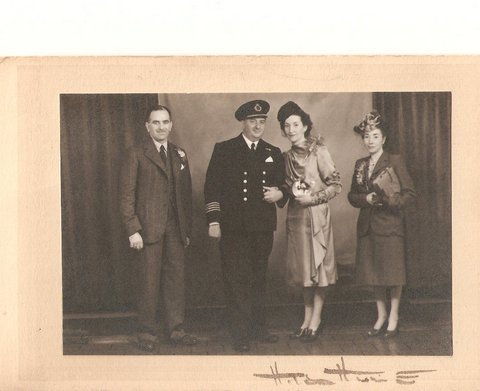 Description of the Photo:
This photograph shows the marriage of Francisco Imaz Anzorandia (Liverpool, 1903- Little Crosby, 1974) and Hortensia Gorrino Arrospide (Liverpool, 1910- Hampshire, 2003). They were the maternal aunt and uncle of Ray Waring.

Additional information:
Hortensia and Rosita were two of the daughters of Julian Gorrino Guarrochena (1874-1952) and Rosa Arrospide San Antonio (1889-1952). Julian and Rosa were both born in Busturia, a small town in Vizcaya, in Spain's Basque Country. They came to Liverpool at the turn of the 20th century and ran a tailor's shop on Park Lane for many years.

Ceferino and Francisco were two of the sons of Juan Lucas Niceto Telesforo Imaz Ibarguren (1869-1917) and Juana Anzorandia Cortazar (1869-1948). Juan was from Mundaka and Juana from Ea, both small port towns in Vizcaya, and they also came to Liverpool at the start of the 20th century.